You are here: Home / Sports / Hawkeyes move to 10-0 with win over Minnesota 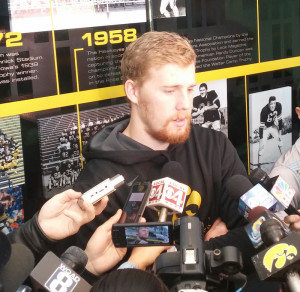 The Iowa Hawkeyes held off the Minnesota Golden Gophers 40-35 Saturday at Kinnick Stadium to move to 10-0 for the first time in school history.

The win also moved Iowa to within one game of securing a Big 10 West Division and a berth in the conference championship game.

Iowa appeared to have put the game away when LeShun Daniels scored on a 51 yard run with 2:01 left in the game. But the Gophers drove right down the field to score and set up for an onside kick. That onside kick went out of bounds and Iowa ran out the final 1:16 on the clock for the win.

“We’re certainly really excited to get the victory tonight for obvious reasons. We talked to our guys about staying humble and staying hungry all week long, and really that just gets right to the point of being prepared. Working on their preparation and keeping the right things in focus,” Iowa coach Kirk Ferentz said after the game.

Iowa is 6-0 in the Big Ten for the second time under Ferentz. They won back the Floyd of Rosedale trophy by beating Minnesota and are 3-0 in trophy games this season. The Hawkeyes defeated Iowa State, 31-17, in the battle for the Cy-Hawk Trophy on September 12th, and Wisconsin, 10-6, for the Heartland Trophy on October. 3rd.

Quarterback C.J. Beathard looked as mobile as he has since injuring his groin and is now 11-0 as Iowa’s starting quarterback, a record that includes a 5-0 mark on the road, a 6-0 mark at home, and a 7-0 mark in the Big Ten. He rushed for 50 yards on 10 carries, including two touchdowns, his fifth and sixth rushing touchdowns of the season.

Daniels also looked healthy again after battling an ankle injury. Daniels rushed for a career-high 195 yards and three touchdowns and now has six touchdowns in the last three weeks.

The Hawkeyes look to go 11-0 and wrap up their home schedule against Purdue on Saturday at Kinnick Stadium.