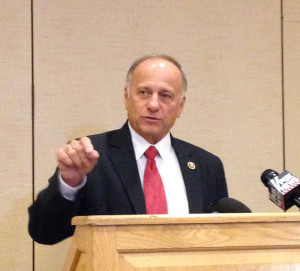 “Our nation’s sick and our nation is getting sicker,” King said this morning during a news conference in Des Moines. “…That’s why my consistent prayer for nearly a year has been to ask God to raise up a leader whom he will use to restore the soul of America.”

King praised “outsider” candidates Ben Carson and Donald Trump, who are currently at the top of Iowa polls, but King said neither is as familiar with the “organism” of Washington, D.C. as Cruz is.

“Our conscience starts to get to us the closer we get to caucus and then we start making those harder decisions of, well, I like this person and that person, but in the end, it isn’t about who you like,” King said. “It’s about who will do the best job as president.” 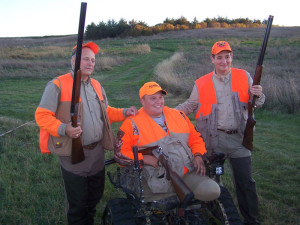 Cruz is a lawyer from Texas who gained national attention soon after he was first elected to the U.S. Senate in 2012.

In 2013, Cruz led a group of conservatives seeking a showdown with President Obama over the Affordable Care Act, prompting a brief government shutdown.

“He knows how Washington works and has successfully taken on the D.C. elites,” King said. “He has consistently stood on principle.”

King told reporters this morning that he believes Cruz can get the crucial support of Christian conservatives, but King admitted Cruz has to work on mending relationships with the GOP’s establishment in order to unite the party and be its nominee.

“First, we all need to be nice to each other, so there’s been a little friction in the Senate. I recognize that, so hopefully that can be toned down a little bit,” King said. “But I think that both sides have to look at it — but it seems to be when the wedges get tapped in, it’s the establishment that taps them in.”

King is one of the staunchest GOP critics of what he calls “amnesty” for undocumented immigrants. King said his public endorsement is timed, in part, to respond to recent questions of Cruz’s stand on the issue.

King said during debate of comprehensive immigration reform a few years ago, Cruz offered “strategic” amendments designed to “pry out” the real motives of bill backers, but King said he’s confident Cruz is on the same page with him when it comes to “amnesty.”

As the dean of the Iowa delegation in the U.S. House, King said he has didn’t want to “squander” his opportunity to influence the presidential race and that’s why he’s endorsing now. King made a similar move in late 2007, publicly throwing his support behind Fred Thompson in the lead up to the 2008 Iowa Caucuses. King did not endorse a GOP candidate in 2012.

King’s son, Jeff, has been working for the Super PAC supporting Cruz.