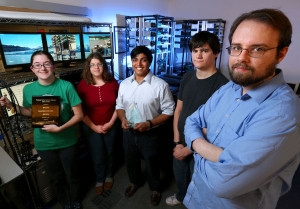 A tech-savvy team of Iowa State University students has won its version of the Super Bowl, returning to Ames from Washington D.C. as winners of the National Cyber Analyst Challenge.

ISU’s Steffanie Bisinger, a senior in software engineering from Atalissa, says she and the four other students faced teams from eight other universities.

“Basically, at this competition, they stick you in a room for five hours and they give you a copy of network traffic and memory dumps from these computers,” Bisinger says. “It’s all from this network that they made up that they think has been the victim of a cyber attack.”

Working against the clock was a challenge, she says, and realistic of the pressure cyber analysts are under when there is a security breach. The contest came in two stages, with the second phase being even more intense — basically looking for a small electronic needle in a very large hay stack.

Bisinger says, “There was more data given to us and we ended up with 75 gigs of data that we had to sift through in five hours to try and find what had happened and answer some questions that they had given us.” The questions included: Are the cyber-attacks connected? Whose account was used to access the server? And did anyone open the malicious email? The ISU team won a $25,000 prize that will be divided between each of the five members.

The competition is sponsored by Lockheed Martin and the Institute for Business and Information Technology from Temple University in Philadelphia.