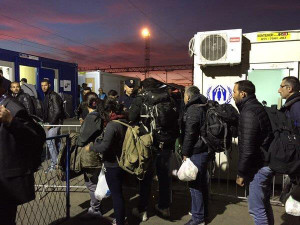 Republican Congressman Steve King has just returned from a trip to Europe to view the migration of Syrian refugees in person.

“I saw the erosion of the culture in Europe and I’m not very optimistic about whether they can ever be formed again to be the core of western civilization that they once were because of the colossal cultural suicide that they’re committing,” King says.

King went to the Kurdish-held areas of Iraq, then he made stops in eastern and western Europe.

In a city near the border of Serbia and Croatia, King says he saw “no end” to the exodus.

“Six trains a day, a thousand people. Over 2 million people going through one single port of entry, pouring into Europe. They cannot sustain that,” King says. “If they had the money and the infrastructure they can’t sustain it because their culture will eventually be shifted over to a culture of Islam.”

King says western Europeans have too much “cultural guilt.”

“They know that their population is collapsing,” King says. “They didn’t make a decision to have babies, to reproduce themselves. They said: ‘All we can do with our demographics being what they are, the only way we save Europe is to fill Europe up with anything but Europeans.'”

“The president is determined to import to America hundreds of thousands of displaced persons who will never assimilate into the American civilization,” King says. “That’s the fruits of Obama’s feckless foreign policy.”

Some Republicans have called on the Obama Administration to admit Christian, but not Muslim refugees from Syria. On Monday Obama called that “shameful” and said the U.S. doesn’t “have religious tests to our compassion.” Authorities in Paris say a Syrian passport was found near one of last Friday’s suicide bombers. It has raised concerns Islamic militants are inserting themselves among the refugees and migrants in Turkey who are fleeing into Europe.