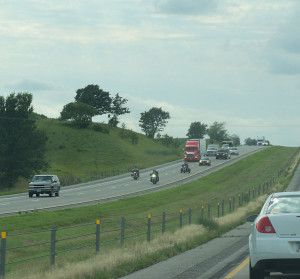 Traffic on Interstate 80 in eastern Iowa.

As one of the busiest and most dangerous travel holidays of the year approaches, a report finds the number of motorists who have died on Iowa’s roads this year is down, while pedestrian deaths are on the rise.

Rose White, spokeswoman for AAA-Iowa, says the drop in some of the numbers is encouraging. “Two-hundred-74 people have lost their lives on Iowa roadways, reflecting a decrease of 3% compared to the same period in 2014,” White says. “Motorcycle fatalities are down 10% compared to the previous four years, with 41 fatalities reported so far this year.”

Those numbers were updated through last Friday. Two other categories in Iowa roadway deaths were distressing, according to White. “Pedestrian deaths have risen with 24 reported this year,” she says. “Bicycle rider fatalities have also risen with five reported as of November 13th.” Thanksgiving, Christmas and New Year’s are three of the busiest and deadliest holidays of the year to be on the road. “With a large number of people heading out on the roadways for the Thanksgiving holiday, we do anticipate, tragically, there will be many people killed or injured in traffic crashes,” White says. “Be aware of your surroundings, pay attention, avoid all distractions, and make certain you and every passenger in your vehicle is buckled up.”

Cellphones remain one of the biggest distractions for drivers. She suggests you shut your phone off every time you get behind the wheel.