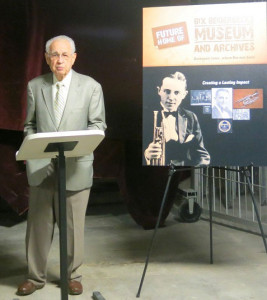 A museum honoring a legendary Iowa jazz musician will be built his hometown. The Bix Beiderbecke Museum and World Archives group is planning the first-ever Bix Museum, to be located in downtown Davenport.

Museum president Howard Braren says Beiderbecke’s music is still adored today, which is why he wants to preserve and exhibit the life and career of the coronetist, pianist and composer.

Beiderbecke was born in Davenport in 1903 and became a globally-renowned jazz musician in the 1920s. When he died in 1931 at age 28, he was considered one of the world’s most influential jazz soloists. The planned 15,000 Bix Museum will have a classroom for students, as well as the musician’s last piano and archived items, like some of the letters Beiderbecke wrote and received.

Braren says, “We have, from the Phil and Linda Evans collection, precious photos and recordings that they took during their lifelong work of researching Bix and his music, of national figures that played with Bix during his career that have never been heard or shown.” The museum will be on the lower floor of the River Music Experience building near the Mississippi River in downtown Davenport. It should open in mid-2017. The group has raised $200,000 so far. It hopes to raise $625,000 with an additional $250,000 endowment.