You are here: Home / Human Interest / Meeting set in northwest Iowa to talk about puppy mills 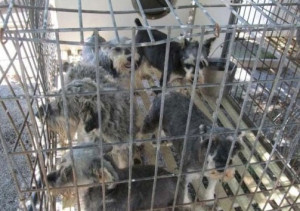 A meeting is set for tonight in northwest Iowa to discuss the issue of puppy mills.

Jen Johnson-Ross, with the Emmet County Animal Shelter, says a report issued this year by The Humane Society placed Iowa fourth in a ranking of the states with the greatest number of problem dog dealers.

“These are puppies who are raised in despicable conditions,” Johnson-Ross said. “They never get to the see the light of day. They never feel grass on their feet. They’re never handled with a kind pet and they’re not socialized.”

The Humane Society report identified puppy mills in 11 Iowa cites; Bussey, Kingsley, Jolley, Osage, Doon, Rock Valley, Milton, Dows, Kalona, Westside, and West Point. Johnson-Ross says, if you’re purchasing a puppy online, you should meet the seller at their home — rather than a “third party” location like the parking lot of a business.

“You know, if they’re not letting you come to their house to see the breeding parents, then what are they hiding?” Johnson-Ross said. Missouri and Kansas have the most puppy mills, according to The Humane Society, followed by Nebraska and Iowa.