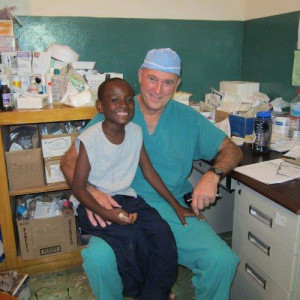 Dr. Wilkerson and Jean Junior in 2010 in Haiti.

A doctor from Spencer is urging members of the U.S. senate to provide adoptive parents a federal tax credit for the expense of completing the adoption process.

Rick Wilkerson and his wife are the parents of nine children, five of whom are adopted.

“There are many caring, loving families who would love to adopt a child,” Wilkerson says. “In the U.S. alone right now there are over 108,000 children who are in the foster care system awaiting adoption.”

But Wilkerson says the cost of completing an adoption is so high, many cannot afford it, especially international adoptions. Wilkerson says his family spent about $30,000 over three years to complete their adoption of a child from Haiti.

“The difficulty I find is that the people that sometimes even work for the U.S. government fail to have the information necessary to make it as easy for us as possible,” Wilkerson says, “or are either overworked or unwilling to provide the assistance.”

Two of Wilkerson’s adopted children are from other countries and Wilkerson asked senators to examine how the Immigration and Naturalization Service works with adoptive families.

“When seeking assistance from INS, it’s all too often that the adopting families are met with a pervasive attitude of resistence as opposed to assistance to the people they are supposed to be helping which makes the task of international adoption either impossible or at least very, very difficult,” Wilkerson says.

Wilkerson met an eight-year-old orphan named Junior in 2010 while he was doing charity care for earthquake victims in Haiti. The INS initially denied a temporary visa for the child. After about 10 months, Dr. Wilkerson was successful in getting Junior into the U.S. for treatment of a “serious medical condition.” Wilkerson and his wife adopted Junior two years later.