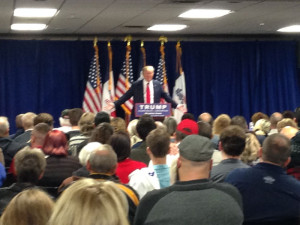 Late this afternoon, Republican presidential candidate Donald Trump went to the Iowa town he first connected with five years ago.

In the fall of 2010, Trump telephoned the people he saw featured in a “60 Minutes” story about the demise of Newton’s largest employer.

“I watched what happened with Maytag and I watched two of folks and I guess I had four or five or six that we helped out. Some had to come out of college and we helped them get through college and, you know, just things, and it made me feel good,” Trump said on WHO-TV. “But I looked at that show and it had a big impact on me because I’m so involved in trade and I’m so involved in people and, you know, it’s a very sad thing that happened, I think.”

Trump was about 10 minutes late for an hour-long, live interview on WHO TV. The televised forum was focused on jobs and the economy. Trump suggested his standing in the polls is tied to the number of people who cannot find the kind of job they want.

“What’s happened since Paris is people are really starting to like my hard line on immigration,” Trump said, to applause from the audience gathered to watch the show in the Newton auditorium where Maytag’s final shareholders meeting was held.

Trump then took questions from a crowd gathered next door in the same complex. A woman in the crowd asked about Syrian refugees.

“Very simply, folks, we can’t take ’em,” Trump said, to applause. “It could be a Trojan horse.”

“Is his campaign going to go into free-fall now that it’s been exposed how little he knows?” the man asked.

Toward the end of the 40-minute rally, Trump — without prompting from a questioner — criticized rival Marco Rubio for skipping a senate security briefing to attend a campaign fundraiser.

“With what just happened in Paris, he’s out in California and he’s raising money so that he can buy ads so that you people can see how wonderful he is. Right?…I think it’s outrageous,” Trump said. “I’ll tell you, I’m so sick and tired of politicians and I think it’s why I’m doing well.”

“I like his boldness, like everybody else,” Bjornson said. “It’s going to be interesting. I think now with this terrorist attack I think that just seals the deal with Donald Trump, in my opinion, because of the way he says he’s going to handle this kind of stuff. I don’t see anybody else stepped up to the plate like that.”

Andrew Worrell of Kellogg, a registered Republican voter, likes Trump’s “no nonsense” style, but he’s hoping Trump will tone down the attacks on his GOP rivals.

“I’m not telling him to change his character, but if he’s going to be our president, he might want to — at least until he gets in the office and then he can say whatever he wants,” Worrell said. “But, no, I like him. I really do.”

Lonnie Appleby of Newton is a registered Democrat who plans to support Trump in the Caucuses.

“I admire anybody that can get away with saying what he says,” Appleby said. “But also someone that isn’t afraid to speak their mind, no matter who it might offend.”

Appleby comes from a family of Democrats — and joked that he doesn’t plan to talk politics over the Thanksgiving table.