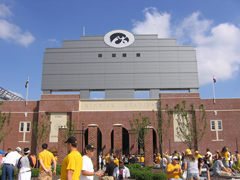 Outside Kinnick Stadium prior to an Iowa football game

University officials are telling fans to prepare “for a more extensive screening process modeled after the National Football League.” A news release from the university (posted below) says the new “clear-bag policy is not tied to any specific threat, but reflects modifications being made at other venues” after the terrorist attacks in Paris.

It is the last home game of the season for the undefeated Hawkeye football game.

In order to make the last home game of the Iowa Football season as safe as possible, the University of Iowa has adjusted its security measures at Kinnick Stadium for the Iowa-Purdue football game on Saturday, November 21.

The UI Athletics Department and UI Police ask that fans arrive early, and come to the game prepared for a more extensive screening process modeled after the National Football League — which places restrictions on purses and handbags.

The clear-bag policy is not tied to any specific threat but reflects modifications being made at other venues in light of recent international events.  Fans should expect to see an increased police and security presence before, during, and after the game.

“We ask everyone for their assistance in making our last home game of the season as safe as possible for all of our friends and visitors,” says Dave Visin, interim assistant vice president and director of public safety. “If you see something, say something.”

A bag check area will be available at the Recreation Building northwest of Kinnick Stadium for fans who need a place to store their items during the game. The bag check-in will open at 9 a.m. and close one hour after the game.  Gates will open at 9:30 a.m. in order to allow fans to reach their seats by kick off.

The following will be permitted:
• Bags that are clear plastic, vinyl, or PVC and do not exceed 14” X 14”
• One-gallon clear plastic bag (Ziploc or similar)
• Small clutch bags, with or without a handle or strap, that do not exceed 4.5” X 6.5”
• Patrons with infants will be permitted to bring diaper bags
• Binoculars, blankets, seat cushions, one sealed plastic water bottle, food contained in a one-gallon clear plastic bag
*Exceptions will be made for medically necessary items after proper inspection at the gates