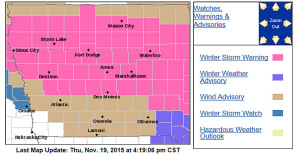 More areas of Iowa will receive significant snowfall Friday, according to the updated forecast from the National Weather Service.

Meteorologist Kurt Kotenberg says a Winter Storm Watch has been expanded to include parts of southern Iowa.

“Interstate 80 to Highway 20 is kind of where we’re looking for the highest amounts to fall. Those locations might be closer to the five to eight inches range, with maybe a few spots picking up a few more inches that,” Kotenberg said. The snow is forecast to enter western Iowa by late tomorrow morning and push east.

“By early afternoon, we’re looking at it being more widespread, so it’ll hit Interstate 35…then by mid-to-late afternoon, it should be across much of Iowa,” Kotenberg said. In many locations, the precipitation will start with rain or a rain-snow mix. The heaviest snowfall rates are projected from early Friday afternoon into early evening and could have a major impact on travel conditions as many motorists will be headed to Cedar Falls for the high school football championships.

The snow should exit the state by early Saturday and will be followed by some bitter cold temperatures and wind chills.