You are here: Home / News / ‘Coarsening’ of America a concern raised by 7 GOP candidates 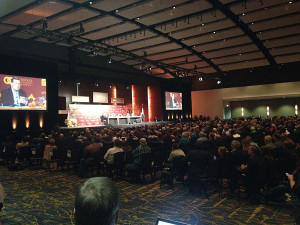 Seven Republican presidential candidates gathered around a table in Des Moines tonight — in front of hundreds of Christian conservatives — for a discussion that focused on the “coarsening” of America and how to spark a revival.

“Have you ever noticed that liberals come to an event like this and yell at us, but do you ever see conservatives going to their events and interrupting them like that?” Huckabee asked and the crowd cheered. “I mean, seriously.”

Huckabee later said he wasn’t bothered by the protesters, because they won’t be thrown in prison or shot like they would in other countries where there are no free speech rights. Texas Senator Ted Cruz told the crowd the greatest moral threat facing the county is an assault on Christian values by Washington, by Hollywood and by the media.

“Mr. President, this is America…You know what? He can’t have either our God or our guns,” Cruz said, to cheers.

“When we look at the constitution, it is there to make sure that all are treated fairly, but it means that everybody has equal rights,” Carson said. “Nobody has extra rights.”

Florida Senator Marco Rubio said the country is threatened by an erosion of values and it starts at the top.

“This week, in the aftermath of the attacks in Paris, we had a president that spent more time attacking Republicans than he did talking about how we’re going to attack ISIS,” Rubio said, “and these are the sorts of things that further coarsen the political discourse in this country.”

In the event’s second hour, moderator Frank Luntz asked the candidates to define what they would consider to be a “just” war. Former Pennsylvania Senator Rick Santorum said it’s time for acknowledge Islamic terrorists believe they are in a holy war.

“We have a president who won’t even identify ISIS as Islamic, nor will he identify it as a state,” Santorum said. “…This is delusional and it’s costing us lives.”

Kentucky Senator Rand Paul called not only for broader background checks on refugees from more than 30 countries where Islamic terrorists cells are forming, plus Paul said there should be broader restrictions on all travel into the United States.

“We have to make dead certain who people are before they come here,” Paul said, to applause.

Toward the end of the event, the moderator asked questions designed to the get the candidates to talk about their faith and how it had been challenged. Former Hewlett-Packard CEO Carly Fiorina discussed her battle with cancer, her daughter’s death and how faith had sustained her during it all.

“I do think it’s worth saying that people of faith make better leaders,” Fiorina said.

The forum was organized by The Family Leader and Bob Vander Plaats, the group’s president, urged the crowd to consider what was said by the candidates, pray about what they heard and choose one to support.

“Tonight is a special night,” Vander Plaats said to welcome the crowd. “We need leadership in this country.”

Vander Plaats and The Family Leader’s board of directors will meet to consider endorsing one of the candidates.