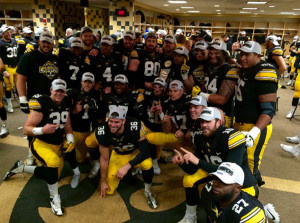 The Iowa Hawkeyes pulled out to a 20-0 lead and went on to down Purdue 40-20 to stay unbeaten and secure a share of the Big Ten West Division title today.  They will play in the Big 10 title game.

The Hawkeyes scored a touchdown on their opening possession for the third straight week, a LeShun Daniels 2-yard run, and have now outscored their opponents 71-23 in the first quarter.

Iowa clinched a tie for the West Division by beating Wisconsin earlier this year and they can win the West outright at Nebraska next week or if Wisconsin loses. Iowa is 7-0 in the Big Ten for the second time under Kirk Ferentz (2002, 8-0).

Quarterback C.J. Beathard is now 12-0 in games he has started, including a 5-0 mark on the road, a 7-0 mark at home, and an 8-0 mark in the Big Ten. He is the only quarterback in school history to win his first 12 career starts. Beathard matched his career high today with three passing touchdowns, the same number he threw against Iowa State this year.

Tight end Henry Krieger-Coble had four catches for a career-high 76 yards and one touchdown. All four catches resulted in a first down, and his last eight catches have resulted in a first down. Krieger-Coble also recovered an onside kick. Jordan Canzeri led the team in rushing, with 101 yard and one touchdown. His 42-yard touchdown came with 2:12 remaining in the game to seal the victory for Iowa.

The Hawkeyes close out the regular season Friday at Nebraska. Kickoff is 2:30 p.m. (CT) on ABC.