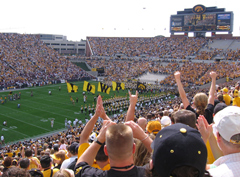 Iowa Hawkeye football fans attending today’s game are being reminded about security changes for entry into Kinnick Stadium. David Visin is the University of Iowa’s interim security director. “The major difference is if you plan to bring a purse or a bag that was normally allowed in the stadium, we are prohibiting that for this game,” Visin said.

Tighter security measures have been implemented at many venues around the country after the terrorist attacks in Paris. “You should bring your items in a gallon-sized ziplock bag or we will allow a small, hand-size, clutch purse for other items as well. But, all those items will be searched, no matter what,” Visin said. Fans will notice an increased law enforcement presence, both inside the stadium and in tailgating areas, according to Visin.

This is the final home football game for Iowa this season. The Hawkeyes face Purdue, with kickoff at 11 a.m.

In Cedar Falls, the University of Northern Iowa has a sold out basketball game at the McLeod Center with North Carolina at 1 p.m., followed by a football game with Southern Illinois in the UNI-Dome. UNI Public Safety Director Helen Haire says there will be an increased number of law enforcement personnel on hand. She says UNI routinely searches bags at these events and that practice will continue today.

(Thanks to Dean Borg and Pat Blank, Iowa Public Radio)