You are here: Home / Agriculture / Governor pardons Spike the Turkey & Zoe the Turkey 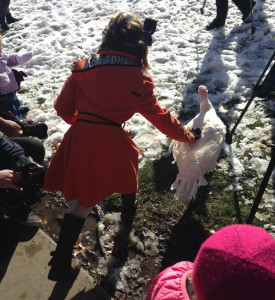 “This has been a tough year for turkeys, so we’re going to give a couple of ’em a special pardon here today,” Governor Terry Branstad said.

Branstad and his wife, Chris, had five of their grandchildren in the backyard of Terrace Hill this morning as the governor spared a “tom” and a “hen”.

“Now therefore, I, Terry E. Branstad, governor of the State of Iowa, do hereby proudly proclaim ‘Zoe the Turkey’ and ‘Spike the Turkey’ free from the harm of carving knives and gravy this Thanksgiving Day,” Branstad said.

The two turkeys were transferred to their new home at Living History Farms.

“A lot of kids will get the enjoyment of seeing these turkeys survive,” Branstad says. “…They deserve it considering the year that turkeys have gone through.” 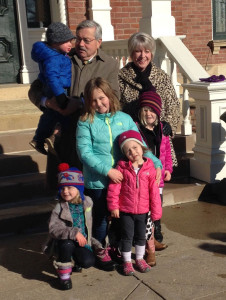 Twenty-five percent of Iowa turkey operations were hit by the bird flu this spring. Iowa Turkey Federation president Ross Thoreson says all the turkey farmers affected should have turkeys back in their barns by the middle of December.

“It’s been a tough year for turkey farmers,” he says, “and we’re just looking forward to getting back to normal and doing things that they love and that’s just raising turkeys and providing safe, nutritious food for Iowa and the world.”

Thoreson does not raise turkeys. His family operates an animal health supply company in Ellsworth. Thoreson says turkey production levels should get back to normal in Iowa by the first quarter of 2016. Branstad says that shows the “resiliency” of the industry.

“I think we learned a lot,” Branstad says. “Hopefully we can prevent this kind of tragedy from happening in the future.”

According to the National Turkey Federation, Americans will “gobble up” 46 million turkeys this Thanksgiving. That amounts to about three pounds of turkey per person. Iowa ranks number nine in turkey production.