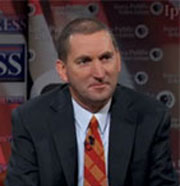 “This is a decision that I certainly wish that (I) didn’t have to make. I wish we didn’t have to be in this spot because I know it disappoints a lot of people — especially coach Rhoads, his staff and our players,” Pollard says.

Pollard announced Sunday that Rhoads will coach the final regular season game at West Virginia, but will not continue as coach next season. “Sometimes you can want something more than it wants you,” Pollard says. “I wanted him to be our coach, he wanted to be our coach, but it just wasn’t meant to be.”

The Cyclones blew a 21-point lead in a loss to Kansas State Saturday and that dropped Iowa State’s record to 3-8. “Paul was not let go because of what happened on Saturday. We have saying in the locker room, no one player, no one play costs a team a game. No one game costs a coach their job,” according to Pollard. “We made the decision to make a change because we simply didn’t win enough games.” Pollard says the team should be winning more than it has.

“I believe our team has got more talent in that locker room than we’ve had in my ten years that I have been here. We have unbelievable potential — but unfortunately they don’t keep score on the scoreboard for potential and talent — they keep score on results — and we just didn’t get the results that we need to get,” Pollard says.

Rhoads is ending his seventh season on the Iowa State sidelines and has compiled a 32-54 overall record His best season was his first one when the Cyclones finished 7-6 and beat Minnesota 14-13 in the Insight Bowl.