You are here: Home / Business / Rubio is pressing for changes in work visa program 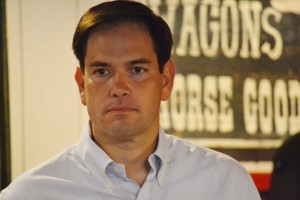 Republican presidential candidate Marco Rubio is calling for new limits in the program that allows U.S. companies to get work visas for foreigners.

“The H1B program is a program designed to allow American companies to hire foreigners with special skills when they cannot find an American to do the job,” Rubio said. “And the problem today is that the program is being abused.”

It is illegal for a U.S. company to replace a worker with a foreigner who holds an H1B work visa, but Rubio said U.S. firms are contracting with companies based in India who then hire foreigners, then get those foreigners visas and transfer them to work in the United States.

“Under this program, you are supposed to attest, sign a piece of paper, that says: ‘We tried to hire Americans to do this work, but we couldn’t find anybody and so therefore we hired this foreigner,'” Rubio said. “…Even if you could improve the company’s not telling the truth, no one is enforcing it.”

According to Rubio, all too often American workers who are being laid off have to train the foreign workers being brought in through the visa program.

“What’s it’s being used for, in essence, is a run around way of replacing American workers,” Rubio said.

Rubio said it’s time to limit the number of visas that can be held by American companies seeking to out-source operations. Rubio is in the midst of a five-day campaign swing through Iowa, his most extensive visit to the state since he started his campaign. Rubio, who is a Florida senator, joked about the snow during a visit to Oskaloosa this weekend.

“Thank you so much for being here today,” Rubio said. “…I know how hard it is. I know every time we get these snow storms in Miami, it’s hard to get to where we’re going.”

Rubio is casting the 2016 election as a “generational choice” and he’s warning the next president must address the ballooning federal debt.

“The cause of our debt is not foreign aid. I know a lot of people point to that,” Rubio said in Oskaloosa. “Foreign aid is less than one percent of our budget. The causes of our debt are the way Social Security and Medicaid are structured for future generations.”

Rubio campaigned in Carroll this morning. He’ll be in Council Bluffs over the noon hour. Tomorrow, Rubio will hold a town hall meeting in Grinnell.