You are here: Home / Business / Gas drops below the $2 mark in Iowa and other states 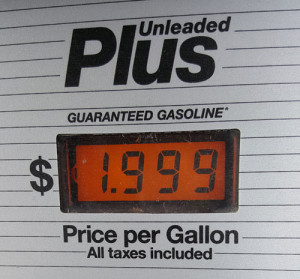 Gas prices are below $2 a gallon in many locations as Iowans prepare to hit the road for the Thanksgiving holiday weekend. AAA Iowa spokesperson Rose White says motorists are thankful for pump prices that haven’t been seen in 7 years.

“Approximately 42-million Americans are expected to take a road trip this Thanksgiving and drivers should pay the lowest pump prices for the Thanksgiving holiday since 2008,” White said. The U.S. Energy Administration has reported domestic crude oil inventories are near an all-time high and White says many Midwest refineries are back on-line after planned or unplanned maintenance.

“Production in the region is at its highest rate in nearly two months and that has attributed to a steady decline in prices across the Midwest,” Rose said. This morning, AAA reported the statewide average for a gallon of regular unleaded gas dropped to $2.08.

“Motorists across Iowa are seeing significant savings compared to last year,” Rose said. “If you look at today’s prices and compare them to last Thanksgiving, they’re saving about 72-cents a gallon.” Nearly 60 percent of all gas stations in the U.S. are now selling fuel below $2 a gallon.