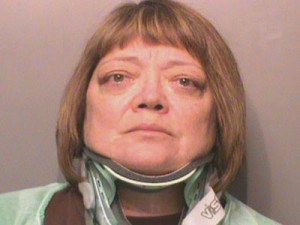 “The evidence at the scene, some things put us on the path to believe that excessive speed and possible impairment might have been significant contributing factors to this accident,” Parizek said.

The crash happened on the evening of Sunday, November 15 when a car driven by 53-year-old Deanna Gliem of Des Moines hit another car that was merging onto Hubbell Avenue on Des Moines’ southeast side. Two men in the car were killed.

Police announced today that Gliem is now facing charges. She was booked into the Polk County Jail on two counts of vehicular homicide by operating while intoxicated and two counts of vehicular homicide by reckless driving. Gliem was injured in the crash. She appears to be wearing a neck brace in her mugshot. The two people in the car that died in the accident were the driver, 60-year-old Richard Hummel, and a passenger, 59-year-old Randall Sonnenburg.

Family members said Hummel had dropped off his granddaughters at church moments before the crash. Parizek would not discuss details about exactly how Gliem was allegedly impaired – either by drugs or alcohol. “Where she was and what she was doing are definitely things we’re interested in and we feel are probably relevant to the investigation,” Parizek said. “Obviously, the charge of vehicular homicide by operating while intoxicated indicates we feel we have the necessary evidence to support that she was intoxicated at the time.”

As of this morning, Gliem was being held on a $70,000 bond. Online court records show Gliem has no criminal record in Iowa.