You are here: Home / News / Group rallies in support of Syrian refugees 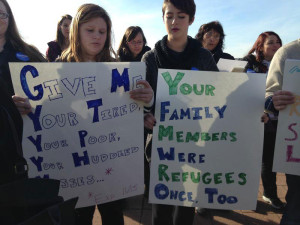 Rally outside the state capitol in support of Syrian refugees.

Around 50 people gathered outside the state capitol Tuesday to rally against Governor Terry Branstad’s order blocking Syrian refugees from settling in Iowa.

The event’s organizer, Samantha Thomas, is the executive director of Global Arts Therapy. “Mr. Branstad, I ask you to find it in your heart, and to find the courage, and to stop being afraid of people that are different from you. Please Mr. Branstad, look around this beautiful state and recognize that we have refugees from all over the world,” Thomas said.

She described Branstad’s comments on the possibility of refugees coming to Iowa as “hatred rhetoric.” Brenda Schumann held a homemade sign which included the words “Give me your tired, your poor, your huddled masses.”

Schumann said she believes the screening process for refugees is already extensive, and doesn’t think people should be fearful that refugees coming to Iowa are secretly terrorists.

“The other thing is, I hear ‘well we’ve got homeless, we’ve got veterans’ and we do. But it’s not one or the other. Most of the people that care about people, care about our homeless, as well as the refugees. We’re a rich enough country that we can help both,” Schumann said.

After the Paris terrorist attacks, Branstad ordered all state agencies to stop any work on settlement of Syrian refugees. But, the governor recently said he would be “more willing” to accept refugees, if a bill before Congress to tighten the screening process becomes law.

On Monday, a group of Iowa Clergy submitted a letter to Branstad, condemning what they call “discrimination” against Syrian refugees “on the basis of religion.”