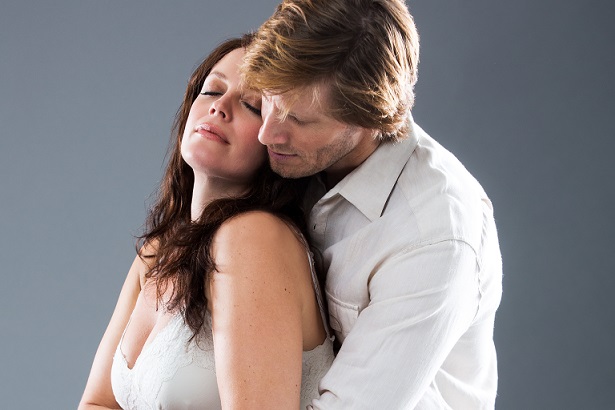 The Broadway production of “The Bridges of Madison County” is opening its national tour in central Iowa this weekend and one of the musical’s main stars is an Iowa native.

Elizabeth Stanley plays Francesca, the Iowa housewife who has a whirlwind four-day romance with a traveling photographer. Stanley was born in Cedar Rapids, grew up in Denison and has a host of relatives across the state, from Creston to Stanton to Gilbert.

She says it was natural for the tour to debut in Des Moines and it’ll be a tremendous holiday homecoming.

“Oh my gosh, it absolutely is,” Stanley says. “It’s really special for me. Even though I lived there about half my childhood, it so really feels like the state that I’m from and where my roots are and generations of my family have been from, so it’s really, really special for me to be there again.”

Based on the best-selling novel by Robert James Waller, the story is set in rural Madison County, famous for its decades-old covered bridges. Since the real bridges of Madison County are a matter of 35 miles from Des Moines, Stanley says she and the entire cast know how necessary it is to start their nine-month national tour here and to give a stellar performance for Iowa.

“Probably no other place we go will people know the story so well and be familiar with it, and in addition to that, really know about the place in which it’s set,” she says. “I think there’s a lot of care and thought that’s put into making it be as authentic as possible.”

Her father’s job with the Rural Electric Cooperative forced the family to move several times, and the Stanleys left Iowa for Illinois when she was in junior high. She’s planning to have Thanksgiving dinner with family members at her uncle’s farm in Stanton and Stanley says she’ll likely need to borrow a car.

“It will be imperative that, at some point, I just take a drive and I get lost on some country roads and just spend some ‘alone time’ amongst the fields,” Stanley says, laughing. “It feels kind of right. It’s very similar to where I grew up, even in Illinois, just the rural life and that’s very much what my character is doing also but I happen to like that myself so I’m sure that’ll be happening.”

The character Stanley is playing onstage was first portrayed by Meryl Streep in the popular 1995 film, a role for which Streep was nominated for Best Actress. Streep has won three Oscars and is considered one of the world’s greatest actresses, so Stanley realizes many people will compare her Francesca to Streep’s version. At first, she says, that was “terrifying.”

“Usually I don’t watch a film if I know I’m going to be playing that role in some other capacity because I don’t want to confine my creative ideas to what that person has done,” Stanley says. “Sometimes, when you watch a performance, it’s hard to get that version of it out of your head, even subconsciously, but with Meryl Streep I felt -not- scared about that. I thought, you know, fine, I’ll watch the movie and if some of that sticks in my brain, I would be so lucky!”

The show opens Saturday and will run through December 5th at the Des Moines Civic Center.