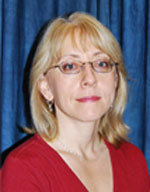 An Iowa State University sociology professor says the world is at a “tipping point” when it comes to human trafficking. Professor Teresa Downing-Matibag is a volunteer with the Iowa-based Network Against Human Trafficking.

The International Labor Organization estimates 27 million people around the world are either enslaved in the sex trade or have been sold into forced labor.

“It is the second-fastest growing crime in the world, next to drug trafficking,” Downing-Matibag says. “If we do not break up the highly-organized networks through which this crime operates, they will become a permanent part of our landscape and no one will be safe in any community or in any home.”

The Iowa-based Network Against Human Trafficking recently conducted a training session for staff at the state prison for female inmates. Downing-Matibag says prison staff tell her there are women in the Mitchellville prison who’ve been trafficked.

The network is providing training for Iowa foster care parents as well as employees in hotels and motels in how best to respond to victims of human trafficking. Downing-Matibag says it’s time to discuss this issue in the open rather than sweep it under the rug “and figure out very targeted and strategic ways to serve victims and identify this activity.”

Downing-Matibag made her comments earlier this month during a statehouse hearing. She recommended changes in state law to target the buyers. She said it’s time to force those arrested for paying for sex to notify their spouse or partner, so they can be tested for sexually transmitted diseases. In addition, she said the courts should be allowed to seize property to pay any fines assesses against those arrested for trying to buy sex.