The Salvation Army’s Red Kettle fundraising campaign is underway once again with the familiar bell ringers outside stores looking for donations.

Cedar Rapids Salvation Army development director, Lia Pontarelli, says the money dropped in the kettles now is very important to what they do.
“During the months of November, December and January we actually raise about 47 percent of our annual operating budget,” Pontarelli says, “so what we do this time of year is imperative to the rest of the year. It helps us pay people’s rent in October, it helps us make sure lights stay on in July. It really helps people throughout the entire year.” 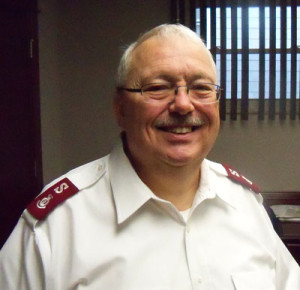 Major Jim Beardsley at the Salvation Army in Des Moines says it’s the same situation for them. “It’s our largest fundraiser that we’ll do all year, we kind of wait and do it in about three months. We are going to raise one-point-one million dollars, close to what we did last year,” Beardsley says. “And all of that… most of that, will go toward helping people in our social service programs.”

Beardsley says the three-month window allows them to raise the funds and then they don’t have to continually do fundraisers throughout the year. It puts some pressure on them to reach their goals in the time period, but Pontarelli says they’ve had good success in the last few years.

“Last year we actually raised more money in our red kettles than we had in previous years for a while. So, we’ve been seeing great response to our red kettles, even though there those other options these day, people are really responding,” Pontarelli explains. “For a lot of people it kind of signifies the beginning of the season for them.” The goal for Cedar Rapids is to raise $790,000 this year, about $30,000 more than last year. 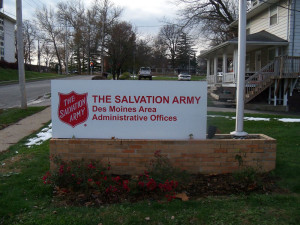 Major Beardsley says the economy can dictate how well the campaign goes. “It does impact what we do. In years past when the economy has been very sluggish people will try to hold onto what money they do get and then they are not contributing to anyone — not even the Salvation Army,” according to Beardsley.

Beardsley says they send out mailings for donations and started putting out red kettles last week. He says the early returns show what appears to be good economic news. “We’re already seeing that people are feeling good about the economy. I think just recently where the gas went down, I think it’s another indicator that this is going to be a good year. So I think people are starting to loosen up and say ‘yes I can contribute to some of my favorite charities’,” Beardsley says.

Pontarelli says the weather can be another big key to the success of hitting the goal of the campaign. “This past weekend where we has the severe weather with the severe snow and temperatures, those are a little bit harder for us to work with,” Pontarelli explains. “Volunteers may decide not to go out those days because of the temperatures. And of course that makes a difference then, because an unmanned kettle is going to raise no money versus a manned kettle with is going to raise two to 300 dollars.”

Beardsley has seen the same thing. “When it gets to be below 20 degrees and they have to keep their hands in their pocket, they are not going to pull it out as they are walking in the stores and give change. So it’s go to get above that 20-degree mark,” Beardsley says. “But you also don’t want it in the 50’s and the 60’s as people are still feeling spring and late fall and they are not quite into that mood.”

He describes the perfect red kettle giving conditions. “Twenty-five degrees, a little snow in the air and people do start to feel Christmassy,” Beardsley says. Both Beardsley and Pontarelli say there are people who give every year because they know about the work the Salvation Army does. She says some make it part of a tradition. Pontarelli says one of the coolest things she’s seen is families that encourage kids to raise money throughout the entire year and then they come and dump the contents of their piggy bank into the red kettles.

If you are interested in making a donation to the Salvation Army in your area of the state, you can go on-line to their website and find a red kettle, or make a donation online.