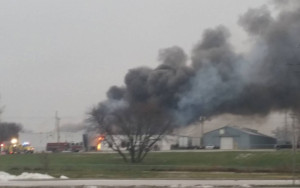 Fire swept through a warehouse in Clear Lake early this morning, with the flames and black smoke visible from miles away.

“The nature of the fuel, the heat we’re dealing with, the fact that it’s a metal building…it just spells out for a long, extended time that we have to be here,” Krefft said. The fire was contained to the one building on the complex and did not spread into an office space. No one was injured.

Some residents of Clear Lake complained about the fumes from the fire, but Krefft said the danger to people downwind was minimal.

“It just stinks, but nothing to be really concerned about,” Krefft said. “We’re keeping everybody inside and there shouldn’t be too much of a worry, it’s more just a bad taste in your mouth.” People traveling to work between Mason City and Clear Lake this morning, as well as travelers on Interstate 35, saw a huge black column of smoke coming from the fire.

“I would say it was a pretty good show with the types of fuel and a lot of particulate matter in that smoke…it was dark, black, and billowing. So, it would’ve been a sight to see,” Krefft said. NTI opened for business in the location in 1999. The company sells axles, tires, and wheels for trailers.