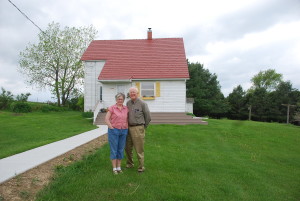 Dale and Sunny Nimrod on their farm near Decorah

Three siblings who grew up on a farm in southwest Iowa will be honored early next year for their actions in selling the property.

Dale Nimrod says his father died of cancer not long after purchasing the farm, near Stanton in Montgomery County, in 1944. Nimrod’s mother stayed on the 240-acre farm and raised her children — with help from neighbors and the community.

In 2005, the Nimrod children decided it was time to sell the property. “We were looking to give back to that community that helped raise us in the absence of my dad,” Dale said. The Nimrod family hoped to find a young family that would appreciate “the land, the community, and the church.”

They settled on Mark and Melanie Peterson, a couple raising five children. “When we sold it to them, two of (the children) thought they may want to go into farming,” Dale said. “Mark was determined, if they wanted to farm, he’d have something they could work on.”

The farm was sold to the Peterson family at a below-market-value price. “We were willing to sell it on its economic value, its productivity value, not whatever its market value is – which is not very relevant, I don’t think, to anything,” Dale said. “So, we had (Mark) fill out some forms from Iowa State, like the kind of forms you’d fill out if you’re going to take out a farm loan, so he could see what he’d need to do in order to  make the payments and we set the payments accordingly.”

The 75-year-old Nimrod taught chemistry for many years at Luther College and lives on a farm near Decorah with his wife Sunny. He and his siblings, Faith and Vance, were recently selected as the 2015 winners of the Practical Farmers’ Farmland Owner Award.

The award will be presented to the Nimrod Family at the Practical Farmers of Iowa’s annual conference on January 22 in Ames. According to the organization, the Farmland Owner Award is given to non-operator landlords “who use their land to advance stewardship and help get the next generation started on the land.”