The holiday weekend ended and turned into a day of continuous work for road crews Monday as Northwest Iowa got another heavy snowfall — with amounts of at least six inches. Plymouth County Engineer Tom Rohe says road crews encountered difficulties in keeping the roads clean.

“By the time they got one lane cleared and came back on the other lane, the snow had already covered the other lane,” Rohe explains. “It was just a constant thing and they just continued to run their route to try to keep it cleared off and to keep it to a minimal level so people could keep moving the best they can.”

Rohe says Plymouth County has 14 snowplows to clear its 365 miles of paved roadways. He says it takes the county road crews nearly two-and-a-half hours to clear the roads. But Monday the there were multiple shifts as clearing the roadways became a non-stop process. “Just going over the route once, and then just starting over gain and going over it a second time and a third,” Rohe says. 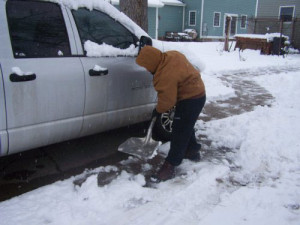 Shoveling out in Le Mars.

The road engineer says their first priority is to clear the paved highways until the snowfall is finished. “We normally don’t start to plow snow off the gravel until you’ve had a pretty good accumulation. The paved roads are something we start as soon as the snowfall starts,” Rohe says.

Rohe says the conditions have kept them from putting down any sand or de-icer agents on the roadways.

“Because if you put chemicals and sand down it’s going to be covered up pretty quickly. And then since we are continually plowing, we are probably going to just plow it off,” according to Rohe. “As the snowfall ends and we start getting it down — then we’ll start to do more sanding and chemical applications at the intersections and railroad crossings and that type of thing.”

It’s the second round of heavy snow crews have had to deal with in recent weeks.