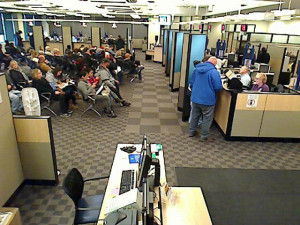 The Iowa Department of Transportation is asking the governor and legislators for enough money to rent a building and open a new driver’s license station in central Iowa.

“Dallas County is one of our fastest growing areas not only in the state, but probably nationally and so what we’re asking for as an adjustment is $425,00 to cover salary and support,” Trombino says, “because we will need to open a facility on the western side of the metro in the Dallas County area.” 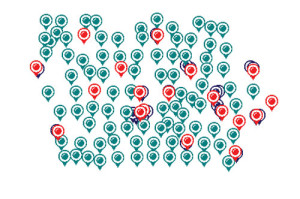 DOT license stations across the state. The red symbols are DOT run stations.

“There’s no way for us to handle that load in the existing facilities really which are sort of on the eastern side of the metro area,” Trombino says. “We really have to have something out on that side with the growth that we see in the future. We haven’t located anything. We think we can competitively we can find a place to rent and some space for us to develop a facility.”

Dallas County officials notified the DOT in November that they intend to stop issuing driver’s licenses some time in early 2017. Trombino is asking for money in the next state budgeting year, which beings July 1st of 2016, to prepare to open a state-run driver’s license station in Dallas County in 2017.

“With the growth that is all anticipated on the western side, we feel it’s very important to get an appropriation so that we can come in, offer drivers licenses, motorcycle licenses and CDLs,” Trombino says.

The DOT currently operates 19 drivers license stations around the state.