You are here: Home / Sports / Hawkeyes ready to take the big stage in Indianapolis

Fourth ranked Iowa and fifth ranked Michigan State collide on Saturday night for the Big Ten Championship and a spot in the College Football Playoff.

In his 16th season at the helm Kirk Ferentz has led the Hawkeyes to a first ever 12-0 regular season. The Hawkeyes are considered the biggest surprise in the nation but Ferentz saus their success is the result of hard work and a focus on details.

Kirk Ferentz meets with the media.

Michigan State has become a regular participant in the title game and this is their third trip to Indianapolis in five years. 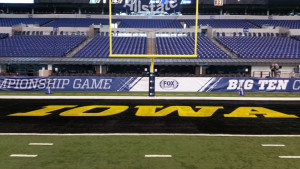 ” I think anybody that reaches this game, first of all, you don’t get here by accident, you have to have an excellent football team. You have to play well throughout the whole season. I think that’s been the tradition of this game for five years now. Certainly it fits both these teams. They’ve had a tremendous year. Some really marquee wins. Our guys have done it week in and week out,” Ferentz says. “You think in a game like this, whoever does come out will be in the playoffs. That’s for the other people to decide that.”

Kickoff is at 7:17p.m. The game will be televised by FOX.