You are here: Home / News / Le Mars church provides a look into Bethlehem 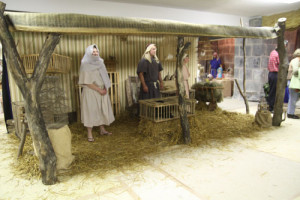 A church in Le Mars is going several steps beyond the standard nativity scene this year.

The parishioners of St. John’s Lutheran Church have turned the basement of the church into the town of Bethlehem.

Doctor Becky DeRuyter of Le Mars serves as one of the co-chairs for the production of “Bethlehem Revisited.” She says they want to recreate the city at the time of Jesus’ birth.

“We try to be authentic as possible, when they first come in they’ll see Herod in his court with his slave and his high priest and rumbling about ‘what is this infant that has been born?’ Then folks will spend maybe a little time in the sanctuary venture downstairs and actually enter the city,” De Ruyter. She says it’s more than a live nativity scene, as it allows participants to be involved.
She says they will meet the census taker and sign and be registered and then make their way through and interact with the shopkeepers and the people who would have been in the city at the time.

Participants are given some money for their journey and must also meet the tax taker. “And then as they leave the city they’ll slowly venture out down the path to the manger to the starry skies and see the shepherds in the fields and then make their way to see the new baby Jesus,” DeRuyter says.

The production goes all out with every detail, including animals. “We’ve got a donkey and some goats, we’ll have a cow and then we’ll also have a sheep, and lambs, we’ve chickens and doves and geese, all kinds of stuff wandering around. So there’ll be all kinds of action happening — not just humans — but some animal noises and maybe even some smells to go along with it,” DeRuyter says.

The Lutheran church puts on the large production only once every five years. She, her husband, and the other cochairs Doctor Greg Jenery and his wife began planning for the event more than a year in advance. She says they started getting the props ready on November 15th and then spent time getting everything else ready and constructing all the various buildings and props. It takes one to two weeks to get everything set up, with most of the work happening in about a week.

More than 300 volunteers help with the production of “Bethlehem Revisited.” There is free admission to the event which will be operating are from noon until 6:00 p-m Sunday. DeRuyter says attendees should be able to pass through the interactive live exhibit within 45 minutes.
By Dennis Morrice, KLEM, Le Mars