You are here: Home / News / Hawkeyes fight to the end in Big 10 title game loss 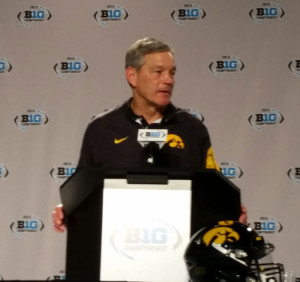 Michigan State scored a touchdown from one yard out with 27 seconds to go and held off an Iowa rally attempt to win the Big Ten title over the Hawkeyes 16-13.

Iowa coach Kirk Ferentz was proud of his team’s effort.

“Well, needless to say, we’re really disappointed with the outcome. Came up short tonight. I just told the team and spoke on behalf of our entire staff, couldn’t be prouder of this group,” Ferentz says. “They’ve just been absolutely fantastic to work with from day one. That was the same way this week. They put a great week of preparation in and I don’t think could have competed any harder tonight. Credit to Michigan State. They played a great football game.”

It was Iowa’s first loss after going 12-0 and winning the West Division of the Big Ten. ” Our football team I thought played with great effort, unbelievable guts and courage out there, and continued to exhibit just stellar teamwork. Really proud of them. We’re disappointed with the outcome. But we still have another football game ahead of us, and we’ll simmer on this one for a little bit and turn our sights to the next ballgame shortly,” Ferentz says.

Iowa had gone up 13-9 on an 85-yard touchdown pass from quarterback C.J. Beathard to Tevaun Smith.

Then the defense nearly stopped the Spartans before giving up the late touchdown.

“We were confident right up to the last play that’s we’d make a stop down there, I think everybody on our team was. We’ve been there before and done that. It was a great, competitive football game. They had it when they needed it. We couldn’t quite get off the field. It’s that close. It’s how close this game was. I think that’s how the margins between the two teams is,” Ferentz says. 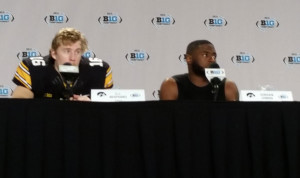 Beathard talked about the close loss. “The team gave a good effort the entire night and we played tough. It was a tough game. Both sides of the ball played tough. Credit to Michigan State, they played tough as well. But close game, we came out on the losing end of it. It’s tough to handle, but you live with it,” Beathard says.

Beathard lost for the first time in 14 career starts. He is the only quarterback in school history to win his first 13 career starts. Beathard’s touchdown pass to Smith was Iowa’s longest play from scrimmage this season. The throw came on Iowa’s second play of the drive, the first play of the fourth quarter.

Michigan State scored at the end of an 82 yard, 22 play drive that lasted 9:04. Defensive back Jordan Lomax says they thought they would keep Michigan State from scoring.” It was just, don’t let up, keep playing tough and physical, just go out there and give it all you got. That’s what all 11 players on defense did. But Michigan State, they just came up and made a play,” Lomax says. The Hawkeyes ran just 16 plays in the second half. Michigan State ran 52 plays. Iowa held Michigan State to its lowest point total of the season.

The Hawkeyes postseason destination will be revealed today. The semifinal pairings and bowl assignments are announced at 11:30 a.m. The final CFP top 25 rankings and New Year’s bowl pairings will be announced at 2 p.m.