You are here: Home / Sports / Uthoff leads Hawkeyes past Leathernecks 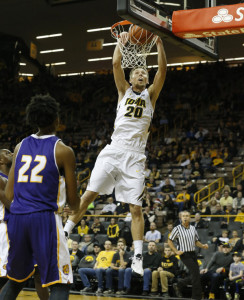 Jarrod Uthoff had a career-27 points against the Leathernecks. (photo courtesy of Brian Ray/hawkeyesports.com)

Jarrod Uthoff poured in a career-high 27 points as Iowa rolled to a 90-56 win over Western Illinois in Carver-Hawkeye Arena. The Hawkeyes held the high scoring duo of Garrett Covington and J.C. Fuller to six-of-25 shooting and jumped out to a 30-8 lead.

“What that defense did with those steals it led to easy offense”, said Iowa coach Fran McCaffery. “We had run outs, we had opportunities to attack the basket in transition and shoot wide open threes and we were in the bonus at the 12 minute mark in the first half. That is another game changer.”

Adam Woodbury added 10 points as the Hawkeyes improved to 7-2.