You are here: Home / News / Hawkeye merchandise seeing an increase in sales 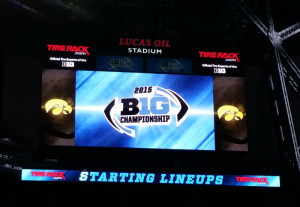 The success of Iowa’s football team has generated more sales of merchandise.

The Iowa football team’s undefeated regular season and appearance in the Big 10 championship has generated a lot of interest in the state and helped the sales of Hawkeye merchandise.

While the outcome of their games are immediately known, Hawkeye Sports Licensing director Dale Arens says the impact on the sale of hats and t-shirts isn’t.

“We don’t know what the volume of that traffic is now. Those royalty reports will come on a quarterly basis,” Arens says. “So the impact of the Hawkeye’s success up to this point and what lies beyond today — we won’t really know what those dollars amounts are for a few months.”

There were special t-shirts sold at the Big Ten championship and now they’ll be sold for the Rose Bowl appearance. Arens says merchandise for those events falls under a whole different category. “The bowl game for instance — none of the products that are sold co-branded with the bowl and our opponent and Iowa — none of the royalties on those actually end up into our licensing account. Those dollars go into that bowl pot, which then filters down to the conference and is distributed out,” Arens says.

But he says there is an impact on the general black and gold licensed merchandise. “The people who are selling Hawkeye things, the retailers, are moving their product and depleting the inventory, and they’ve got dollars to invest into more inventory with the excitement that will proceed next year’s season,” Arens says. “So, it’s somewhat like an annuity plan in terms of what the revenue will be in licensing until almost a season later.”

Arens says he has seen friends and others on social media sporting Iowa colors that he didn’t know were Hawkeye fans until this year’s undefeated regular season. So, he knows merchandise sales have picked up. “I think people that maybe have always been a fan or maybe haven’t adopted their team yet, when there’s success, everybody loves a winner. So, yeah I think you are seeing a lot of pride being expressed by showing their colors. Whether they were a closeted fan, or a long-time fan,” according to Arens.

The Hawkeyes will play in their first Rose Bowl in 25 years when they face Stanford on New Year’s Day.