You are here: Home / Education / ‘Hour of Code’ event in 600+ Iowa schools this week 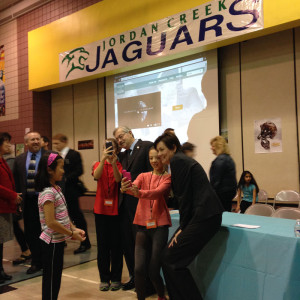 More than 600 Iowa schools and 200 other organizations in the state are participating this week in what’s called the “Hour of Code”.

“Thumbs up if you’d like to learn how to make apps for your phone,” Aaron Witt, a sixth grade at Jordan Creek Elementary in West Des Moines, asked a student assembly on Monday.

Jordan Creek Elementary is one of the schools where students will be writing computer code in class for an hour.

“We’re really excited to make this week for every student in our school to focus their learning on computer science and coding,” Witt said.

Carson Copple — one of Witt’s 6th grade students — has learned computer languages, like Java, and he has his own robot.

“Our lives revolve around computers every day: our alarm clocks, lights, telephones, televisions, cooking and households appliances,” said Copple. “Automobiles, retail stores, paying and receiving bills and more are all affected by computers.”

Uma Dukle, one of his classmates, was also invited to speak at the assembly.

“Coding, put simply, is giving a set of instructions to a computer chip,” she said. “…Coding is growing in all fields and a large population of people already use for their career and there’s a growing demand for people with coding skill, so basically, if you know how to code, you’re almost guaranteed a job.”

Governor Branstad and Lieutenant Governor Kim Reynolds were at Uma’s school Monday to tout the “Hour of Code” initiative. Organizers of the coding project expect more than 100 million students around the globe to participate this week.