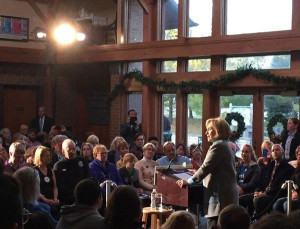 “When we need to be doing everything we can with people across the world to fight radical jihadists, Donald Trump is supplying them with new propaganda,” Clinton said during remarks in Urbandale, Iowa. “He’s actually playing into their hands. He will become part of their recruitment efforts.”

Clinton said ISIS has a “hateful ideology”, but she accused Trump of “trafficking in prejudice and paranoia.”

The crowd sat on chairs in an indoor area near the Living History Farms gift shop that is rented out for wedding receptions and other events. The audience applauded when Clinton said “the vast majority” of Muslims around the world are peaceful, law-abiding people.

“Let’s not let Mr. Trump and others get away with the idea they’re promoting that we are at war with a whole religion,” Clinton said. “That is just wrong and wrong-headed.”

According to Clinton, it will take cooperation from all quarters, including from Muslims, to “stand against” the barbarity of radical jihadists.

“I will do whatever I can, but I’m calling on all leaders to stand up and to end the hateful, demagogic comments and start to try to pull our country together,” Clinton said.

AUDIO of Clinton’s remarks regarding Trump, 6:15

Clinton also touched on her call to spend hundreds of millions of dollars fixing America’s crumbling infrastructure and she touted her ideas for imposing restrictions that would financially penalize corporations that are “gaming the system” to escape paying taxes in the U.S.