You are here: Home / Agriculture / Grower in Plymouth County runs out of Christmas trees 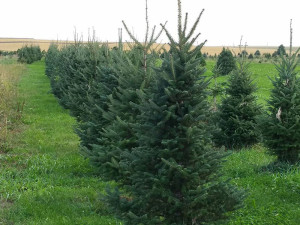 Trees on the T&S farm.

A Christmas tree grower in northwest Plymouth County says a rush of customers during the Thanksgiving weekend has left her with a short supply in the final weeks before the big day.

“I do know here we are approaching the end of our season and the fields will be closed in order to save trees for next year. I do have some left in our tree barn, but they aren’t very big though, ranging from five to seven foot,” Miller says. “If I continue to let customers take trees out of the field this year, I won’t be able to have anything bigger than seven foot next year.”

Miller says customers came out early this year and more and more people are choosing the taller trees than in previous years. She says the trend has gone from people looking for seven to eight-foot trees to many wanting ten to eleven-foot trees. Miller doesn’t know the reason why the taller trees are becoming more popular. She credits social media for the surge in new customers arriving earlier in the season to her Christmas tree farm.

Miller says she used to hear that people didn’t even know the tree farm was there, but using Facebook and other social media has helped. “We had tons of new people this year who referenced friends on Facebook as how they learned about us,” Miller say. She says with the taller trees all gone, she is hesitant to sell the smaller trees.

“It’s a conundrum — the more I sell of those smaller trees — the less I have next year,” Miller explains. “It takes eight years to grow a tree to eight feet. The more seven-footers and six-footers that I allow to be cut out of that field, the longer it is going to take me to replenish that supply of trees She sees more families choosing to have a real tree for their Christmas.

“I think the number one reason why people go to a choose and cut farm is for the family experience. It’s another tradition or holiday outing that you can do with your family. You are going to buy a tree anyway, so the cost isn’t extra. You are not paying an entrance fee to go somewhere,” Miller says. “It’s something you can do with your family and share good memories — it’s just really tradition.” The Christmas tree grower says she sells around one thousand trees each year.