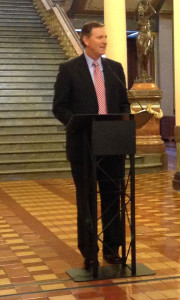 “As you’ve seen in the polls, he’s beginning to rise, but not only will he be very, very strong here in Iowa, we believe he’ll be strong in the early states,” Vander Plaats said during a news conference in the Iowa capitol rotunda. “And we believe he can be the nominee to take on and defeat Hillary Clinton and the leftist agenda.”

Vander Plaats personally endorsed Mike Huckabee in 2008 and Rick Santorum in 2012, but Vander Plaats said in 2016, voters are “moving on.”

Vander Plaats credited Cruz with having the organizational muscle in place to run a successful campaign in Iowa and elsewhere, plus Vander Plaats praised Cruz’s campaign fundraising.

“Our goal is to unite conservatives around Senator Ted Cruz and I believe you’re starting to see that happen already in the state of Iowa, but I also believe around the country,” Vander Plaats said. “…We have believed for a long time if we’re united, we’ll win. If we’re divided, we’re going to repeat 2008 and 2012.”

Vander Plaats talked with Huckabee, Santorum and Donald Trump in the past 24 hours to let them know he’d be endorsing Cruz.

“They are exceptional. They’re class acts,” Vander Plaats told reporters. “I’m sure they’re going to continue to run vigorous campaigns. I would expect nothing less out of them.”

Four years ago, Vander Plaats expressed the hope that other candidates would end their campaigns so Santorum could be the consensus choice for conservatives. This time around, Vander Plaats told reporters it’s up to the 2016 candidates to make that decision.

“We’re going to encourage conservatives to coalesce,” Vander Plaats said. “But that’s going to be up to Governor Huckabee and to Senator Santorum or anybody else if they should exit the race.”

Vander Plaats serves as president and CEO of The Family Leader, a Christian conservative organization. The group’s legal counsel, the chairman of its board of directors and its chaplain also endorsed Cruz today, but The Family Leader organization did not. Vander Plaats told reporters one board member who is “a personal friend” of another candidate was the lone hold-out. The rest of the board supports Cruz.