You are here: Home / Fires/Accidents/Disasters / Survey finds increasing use of smartphones by drivers 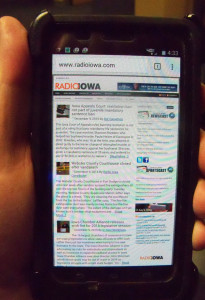 A survey finds the number of drivers using the internet on cellphones while driving has doubled.

A survey by an insurance company finds uses other than talking are becoming bigger issues for the distraction of drivers on cellphones. State Farm Insurance spokesperson, Ann Avery, says the have data from seven years of driver surveys.

There are some other numbers in the survey that raise concern. “There’s some significant increases in drivers who report they’re using GPS, or reading and responding to emails, or reading and updating social media networks,” according to Avery.

The survey found 88 percent of drivers now have a smartphone. People in the 40 to 49 year old category saw the biggest jump from a regular phone to a smartphone, moving from 47 to 92 percent in the last 7 years. Ninety-nine percent of the drivers aged 18 to 29 have smarphones. Avery says as the number of smartphones has increased, so have the things you can do with them.

“The number and types of distractions that are available on cellphones have grown over the years and that’s worth noting and could be something that is reflected in the numbers,” Avery says. “But regardless of what the distraction is — we want to remind people — that despite what the demands on your attention are, please stay focused all the time on your driving.”

Drivers were asked in the survey what it would take to get them to put their phones down while on the road. “And their answers were: causing a crash while reading or responding to a text message, financial and/or legal consequences that might result, and thirdly, getting caught by police. So, these responses do highlight that there are some things that will deter people. It encourages us to consider a multi-pronged approach to curbing distracted driving.