You are here: Home / News / Temperatures could set new highs in parts of the state 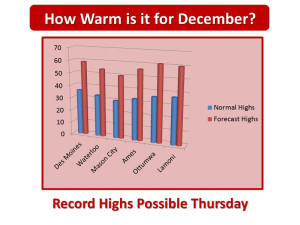 Some Iowans may be rocking shorts and t-shirts this afternoon as they wash their cars or rake leaves, a rare treat for December. Forecasters are predicting unseasonably warm weather with possible new record high temperatures.

Meteorologist Frank Boksa , at the National Weather Service, says parts of the state will see highs that are 20-to-25 degrees warmer than the norm.

“Mainly southern Iowa is on tap for seeing some very warm temperatures, possibly record-breaking temperatures,” Boksa says. “We’re looking at highs near 60, mainly for locations south of Highway 30.” Most of northern Iowa will see highs a bit cooler. For example, Mason City may reach 50 this afternoon, still not bad, considering the normal high is only 30.

The Facebook page of the National Weather Service’s Des Moines bureau features “remember when” pictures from December 8th and 9th of a few years ago, when huge snowdrifts coated much of the state. “That was 2009 that we were advertising,” Boksa says. “That was a blizzard. It was an event that came through in about a 24- to 36-hour period and the Des Moines area had 15 inches of snow.”

While he refused to try and predict whether Iowa will have a “white Christmas,” Boksa did say the chances are rising for snow on the ground by December 25th, as a cold front will be rolling into the state in about a week’s time. Boksa says, “After seeing highs in the 50s and 60s, by next week, mid-to-late week, Thursday-Friday timeframe, we’re looking at highs in the mid-20s across the north and only around freezing for Des Moines and southern locations.”

The weather center at a television station in eastern Iowa is boasting a chart that claims northern Iowa has a 75 percent chance of a white Christmas, 50 percent for central Iowa, and about a 33 percent chance for the state’s southern third.