You are here: Home / News / Carson warns GOP ‘bosses’ may be plotting to ‘subvert the will of voters’ 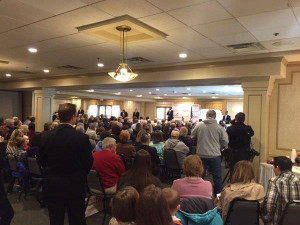 Republican candidate Ben Carson is warning “party bosses” may be plotting a “theft” of the GOP’s presidential nomination — and Carson issued a statement today saying he won’t stand for it.

“I would hope that we would respect the will of the people,” told reporters this morning.

During a campaign stop in Burlington, Carson expressed concern after published reports indicate party leaders have huddled to discuss how to manage the Republican National Convention next summer if delegates will be called upon to choose the party’s presidential nominee.

“The party should not be doing anything that is deceptive and under the covers,” Carson told reporters in Burlington.

Donald Trump has repeatedly said he will run as an independent candidate in 2016 if he is not treated fairly by the Republican Party. Carson is now suggesting he’ll bolt, too, if “party bosses” try to “subvert the will of voters.”

Carson spoke to a crowd at the Burlington Golf Club this morning. Carson told reporters afterwards that he is not joining Trump’s call bar all Muslims from entering the country until the U.S. can ensure Muslim travelers aren’t terrorists.

“What I would do is work on having a much better vetting process for everybody, not necessarily just Muslims,” Carson said, “because you have to realize that the global jihadist movement is recruiting people from every place.”

Carson said if the U.S. “is only looking for one group of people” trying to get into the country, it would be “pretty easy” for terrorists “to fool us” and adopt another persona.

Carson will hold a midday town hall meeting in Moravia.