You are here: Home / Crime / Courts / Kansas murder suspect may be in Iowa 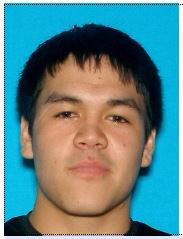 One of Kansas’ most wanted fugitives could be with relatives in Iowa. Deputy U.S. Marshal, Chris Johnson says they are looking for 20-year-old Bryan Levi Bridges.

He says Bridges is wanted for a 2014 home robbery where the home owner was murdered.

Birdges is wanted for first-degree murder, aggravated burglary, and conspiracy to commit aggravated robbery for the crime in Pittsburg, Kansas. People who were with Bridges were arrested, but Deputy Johnson says Bridges fled and could be here. “Some of his family members often do roofing projects and things like that, are working for cash doing roofing type work in the Iowa area,” Johnson explains. “We don’t have a specific town or area where they may be in Iowa.”

He may also have personal ties in Mexico or Denver, Colorado. Johnson says they are seeking help in finding him and anyone who may’ve spotted Bridges or have information about him is urge to call the U.S. Marshals Service or local police. Johnson urges you to use caution.

“The murder weapon has not been recovered from the crime, so he is considered armed and dangerous at this point,” Johnson says. Bridges uses the alias “El Chinito,” is described a five-foot-seven Laotian/Caucasian male, but he may be claiming Hispanic descent. He weighs 170 pounds and has black hair, brown eyes and a scar next to his right eye.

A reward of up to $20,000 is being offered for information leading directly to Bridges’ arrest. Anyone with information is urged to contact the U.S. Marshals Service Communications Center at 1-800-336-0102.