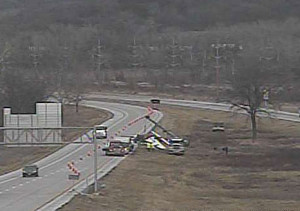 DOT traffic camera shows the plane wreckage on I-29.

An Omaha man has been identified as the victim of Thursday’s crash of a small plane north of Council Bluffs.

Pottawattamie County Chief Deputy Sheriff John Reynolds says the plane went down shortly before noon in the median of Interstate 29. “Unfortunately, the lone male occupant — the pilot — did not survive the event,” Reynolds said.

Sixty-five-year-old John Rogers died at the scene. He had just taken off from Eppley Airfield in Omaha and had called back to the airport, requesting permission to return after the plane experienced some sort of mechanical issue.

“Witnesses report he was flying extremely low. He was flying south and as he banked to the west, to make an approach back to the runway, his wing tip caught a power line which cartwheeled him into the earth,” Reynolds said. The plane, a 2003 single engine Piper Malibu Meridian, crashed nose first and landed upside down. The left wing was torn away from the fuselage of the aircraft. As of this morning, the wreckage remained in the median of I-29.

A crew from the National Transportation Safety Board (NTSB) is expected to be at the crash site some time today. “We expect they’ll conclude their on-scene portion of their investigation and the plane will be removed and taken to a secure location somewhere for them to complete their investigation,” Reynolds said. Investigators from the FAA arrived yesterday.