You are here: Home / Crime / Courts / Woman arrested in Utah in death of Ottumwa girl 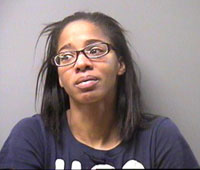 Nearly two years after an investigation began into the death of an Ottumwa boy, a woman is now jailed in Utah for the child’s murder and she awaits extradition back to Iowa.

Thirty-one-year-old Kashenna Tucker was arrested in a suburb of Salt Lake City, Utah. She’s been charged with first-degree murder in the death of three-year-old Wysdom Evans, of whom she was guardian.

Ottumwa Police Chief Tom McAndrew says the nearly-two-year delay in filing charges was caused by the need for a lot of expert and medical analysis on the case.

McAndrew declined to share the cause of death. Police have been investigating the case since Evans died in January of 2014 at an Iowa City hospital. They conducted searches of an Ottumwa home shortly after Evans’ death.