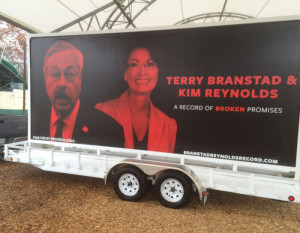 The Iowa Democratic Party and the group Progress Iowa are criticizing Republican Governor Terry Branstad’s record on the day he becomes the nation’s longest-serving governor.

Progress Iowa has put a 10-foot-tall billboard on the back of a truck that’s driving around the statehouse today. The billboard features pictures of Branstad and his lieutenant governor, Kim Reynolds, along with a web address.

“A new website called www.BranstadReynoldsRecord.com which higlights the four promises that they list on their website and that they have made during campaigns and their administration and shows how they’ve broken those promises,” Sinovic says.

“He’s been in office for a while, which is great, but it would be even better if he actually delivered for his constituents,” Sinovic says.

The Iowa Democratic Party issued a written statement this morning, blasting Bransad for pushing a “misguided agenda.” Democrats say Branstad has ignored “the pleas and concerns of the people of Iowa” by vetoing millions of dollars for Iowa schools and endangering health care for more than half a million Iowans who depend on Medicaid. Iowa Democrats say Branstad’s public approval rating is “tanking” as a result. Half of Iowans say they disapprove of Branstad’s job performance, while 38 percent gave the governor positive marks on leadership.