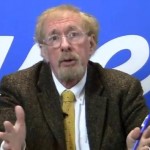 There are “help wanted” signs in the windows of many Iowa businesses lately as the year-end holidays approach.

Many employers say there is a possibility those temporary jobs will become permanent after the Christmas rush is over, but Creighton University economist Ernie Goss is something of a Grinch on the topic. Goss predicts few employers will keep holiday workers on the payrolls very far into January.

“Not many, particularly with health care reform now staring down the face of many of the employers,” Goss says. “When the hours go above 30, they have to provide some sort of health care and that means they’re less likely to do that now than they have been in previous years.” Early indicators show this may be a weak holiday season for retailers in Iowa and across the Midwest. Goss says that doesn’t mean people aren’t spending money.

“One of the reasons we’re not seeing the growth in retail sales we’re normally seeing is, a lot of consumers are buying products we don’t include in retail sales,” Goss says. “That trip to Aruba, those vacations are not included in retail sales and a lot of consumers are spending that way.” On the job front, there are about two-million more people working nationwide now compared to a year ago but Goss says many of those jobs are part-time and most of those jobs are not in the Midwest.