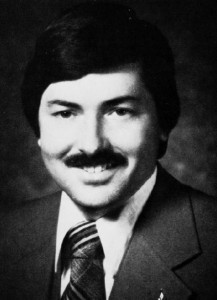 Governor Terry Branstad in his first years as governor.

A University of Minnesota researcher says most of the U.S. governors who have served longest in office served in the past five decades. Eric Ostermeier recently wrote a blog post about Branstad and the top 50 longest-serving governors in U.S. history.

“Most of these governors did not die in office,” Ostermeier says. “They were either term-limited or did not run for reelection.”

Branstad now holds the record with 21 years, 11 months and three days in office. There is only one other governor on the “top 50” list in terms of longevity in office who is still serving as governor. It’s Jerry Brown who has served almost 13 years as California’s governor. Ostermeier calculated how long governors have served in office after adoption of the U.S. Constitution and another Iowa governor is on the “top 50” longest-serving list. Robert Ray served nearly 14 years as Iowa’s governor, from 1969 through 1983 when Branstad took over.

Iowa is among the 14 states which do not have term limits for governors.