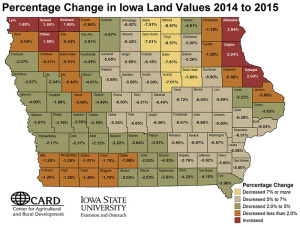 Iowa State University extension economist Wendong Zhang says the means the average acre of land is worth $310 less. “And now the value is at $7,633 per acre,” Zhang says. He says it is the first two-year drop in land values since 2000, and values have now fallen almost 13 percent from the historically high 2013 values.

“Forty-percent of the respondents cited lower commodity prices as a major and active factor in driving the Iowa land values down,” Zhang explains. “And I do want to point out that the U.S.D.A. reported a 36 percent decline in U.S. farm income. So this 3.9 percent decline is lower than a lot of people would expect it.” He says the decline is lower because of the previous years of higher commodity prices.

“Farmers have accumulated a lot of cash over the past few years during the high commodity price years,” he says, “And you can see that the farmers are still bidding up farmland values even this year. In Sioux County there is one recent sale for almost $18,000 (an acre) by a neighboring farmer. So, many farmers still have cash on hand.” Zhang says just one are of the state didn’t see their values drop.

He says the northwest district is the only one that reported an increase, due to high livestock prices. And the north-central district saw the highest percentage decrease of six-point-seven percent. For the third year in a row, Scott and Decatur counties reported the highest and lowest farmland values. Decatur County reported a low statewide value of $3,514 or a drop of $73 an acre. Scott County reported the highest farmland value at $10,918 — however, values there declined about $700 an acre. If you owned lower quality land, you likely saw its value drop less than that of high quality ground.

“The low quality land only declined by point-nine percent and the high quality and medium quality declined by five and three percent respectively. And the reason why the low-quality land decreased less is driven by an increase in recreational demand and higher payments for conservation programs like C-R-P,” Zhang explains. Zhang says the drops in land value the last two years could be expected.

“I do see this as a correction and its a reflection that land values are driven by economic fundamentals — when commodity prices dropped, farm income dropped, and land values dropped subsequently,” Zhang says. Zhang says many are looking to what will happen with interest rates to see what might happen in the next year with land values as he says the predictions are that commodity prices will stay at this level.