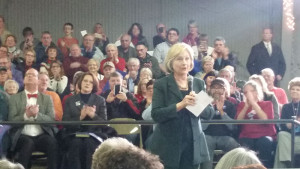 “I listen to the Republicans and, honestly, they live in an evidence-free zone,” Clinton said in Mason City tonight. “They are not well-acquainted with the facts about what works when it comes to creating more good-paying jobs and raising incomes.”

“The thing that really bothers me is they act like they can just wave a magic wand or say: ‘Carpet bomb the desert,’ and that somehow is going to defeat ISIS,” Clinton said. “Well, I’ve got news for them. You’ve got to have a strong, smart strategy.”

Clinton said the U.S. must not only attack ISIS from the air, but provide the Arabs and the Kurds more help so they can fight them on the ground.

Clinton also told the crowd in Mason City that she wants to work with “responsible gun owners” to reform the nation’s gun laws.

Clinton said if you’re “too dangerous to fly in America” and on the so-called “no fly” list, then you should be barred from buying a gun.

“Here’s how far-gone the gun lobby is. They put pressure on Republicans in congress this last couple of weeks not to pass a law prohibiting people who are on the ‘no-fly’ list from buying a gun,” Clinton said. “I find that just beyond understanding.”

Clinton also made stops today in Iowa City and in Omaha, where billionaire investor Warren Buffett publicly endorsed her.