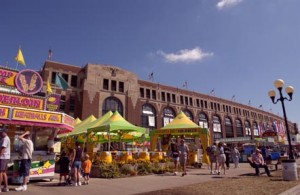 (Correction: This story was updated Wednesday at 2:30 p.m. after it was incorrectly reported the subject of the story was the first woman elected to the State Fair Board)

A Stratford woman has been elected to serve on the Iowa State Fair Board, the 16-member panel which oversees the state’s biggest tourist attraction and the Blue Ribbon Foundation.

Tennette Carlson of Stratford was elected on Sunday and will be serving on the board for a one-year term. She’ll serve the north-central Iowa district, which includes 19 counties.

“There were actually six of us running for the one open seat and so it came down to three different votes but I prevailed in the end and feel very honored,” according to Carlson. After she was sworn in, the board got right to work, making plans for the next Iowa State Fair to be held in August of 2016.

Carlson says she will continue to serve as the president of the Hamilton County Fair Board in addition to serving on the state fair’s governing board. “It’s been on my bucket list for years,” she says. “We’ve camped at the state fair for the last 21 years. Both of my boys show livestock and do 4H presentations. The state fair has been our family vacation for a long time and now it’s a reality for me to serve on the Iowa State Fair board.”

Other notables who serve on the state fair board include: Governor Terry Branstad, Iowa State University President Steven Leath and Iowa Secretary of Agriculture Bill Northey.