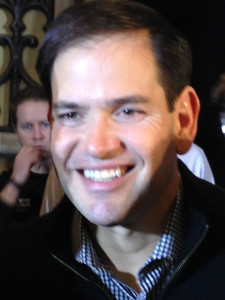 “I am really grateful you’d come out here this morning to hear me,” Rubio said as he took the stage in an Ankeny hotel meeting room. “And I am thankful for those of you that are already on board and we’re going to work hard in the next 12-14 minutes to convince the rest of you and, if not, we’re going to keep coming back until we get you.”

Rubio referred to some of last night’s discussion during the debate and he specifically brought up rival Ted Cruz’s recent promise to “carpet bomb” radical Islamic terrorists “into oblivion.”

“I don’t know if sand can glow in the dark, but we’re going to find out,” Cruz said December 5 in Cedar Rapids.

Rubio said this morning: “‘We’re going to make the sand glow.’ That’s easy to say. What are you going to do it with? You need to have the capability to do it with and we’re losing that capability.” 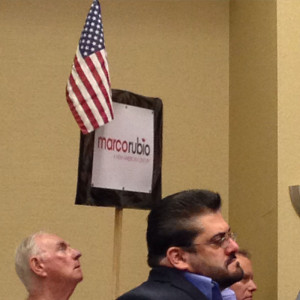 Rubio is suggesting Cruz has weakened the ability to track terrorist activity by voting to restrict the mass collection of phone data.

“It’s not enough to just go around talking about how tough you are,” Rubio said in Ankeny this morning. “…Are we going to have the capabilities or not to do this? How can it be that we’re weakening our intelligence capabilities?”

Rubio warned terrorists are aiming for a final, apocalyptic showdown with western civilization. Dennis Dietz of Ankeny plans to attend a Republican Caucus on February 1 and he was there this morning to listen, but Dietz hasn’t chosen a candidate.

“They’re all using this fear factor, you know, and I’m not sure it’s as dire as they all make it out to be,” Dietz said after Rubio’s speech.

Dick Rue of Ankeny wants to see a Republican win the White House in 2016 and he believes Rubio would be a good General Election candidate.

“He’s a moderate conservative and I like that,” Rue said after Rubio’s speech. “Some of the other contenders — Trump, Cruz — they’re polarizing.”