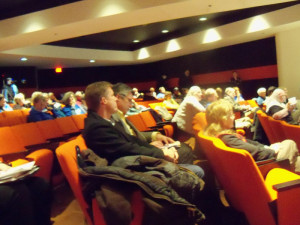 Around 140 people signed up to speak at the DNR public meeting on the Baaken pipeline.

The Iowa Department of Natural Resources public meeting on the request for a construction permit for the Baaken oil pipeline started out at a fever pitch Wednesday evening.

Dakota Access is requesting the permit to allow the pipeline to cross public land in four areas.

Those who wanted to speak out at the meeting became upset when the head of the DNR told the audience members who had sign up to speak that they would be taking and recording comments from two people at the same time.

Audio: The crowd at the DNR meeting.

Opponents of the pipeline at the meeting started shouting “one at a time” and said they wanted to be able to hear everyone’s comments and it would not be a public hearing if everyone couldn’t hear the comments. DNR director Chuck Gipp explained that they needed to record the comments to be able to transcribe them for use in making the decision. 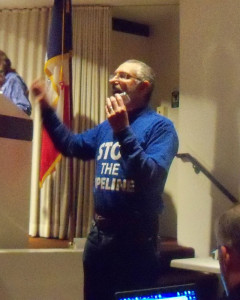 Jonas Nagram led off the comments by standing and shouting out to the audience.
Audio: Nagram comments.

“There’s not way the DNR can prevent a leak from this pipeline,” Nagram says. Gipp directed him to sit down and Nagram replied “I don’t need to sit, thank you.” Gipp then instructed the staffer calling out the names of the speakers to move to the next person.

That set off another round of chants.  Audio: crowd chants.

“The DNR must in exercising its sacred duty to the people and resources of Iowa — reject this permit clearly and unequivocally,” Nagram says. Things calmed down after that as the speakers came forward and gave their comments into a recorder.

Emily Schettler of the Iowa Association of Business and Industry spoke out in favor of the pipeline. “The permit under consideration is necessary for the overall completion of this project, which will benefit Iowans with jobs and stimulate economic activity both for the state and in local communities. Furthermore, the transportation of oil by pipeline is a safer method of shipment than by railcars and trucks,” according to Schettler.

Richard Hulley of Fairfield is against the pipeline. “A crude oil spill in this very special wildlife management area would be catastrophic and it would undue the years of careful restoration that is already underway, and which must be held in trust for all of us today, and for future generations of Iowans,” Hulley says.

J.D. Ramanco, a member of the operating engineers union, spoke out in favor of the pipeline, saying it would create jobs for people like him who are professionals in such work. “The company has carefully conducted surveys across the entire route to identify any threatened or endangered species. Finally, they have put together a comprehensive plan to address any anticipated findings,” Ramanco says. Around 140 people gave their comments on the issue.

The permit request is to cross the Big Sioux River, the Big Sioux Wildlife Management Area, the Des Moines River and the Mississippi River. The DNR will continue taking comments on the permit request through January 5th. A DNR spokesman says they will likely not be making a decision on the issue until February.